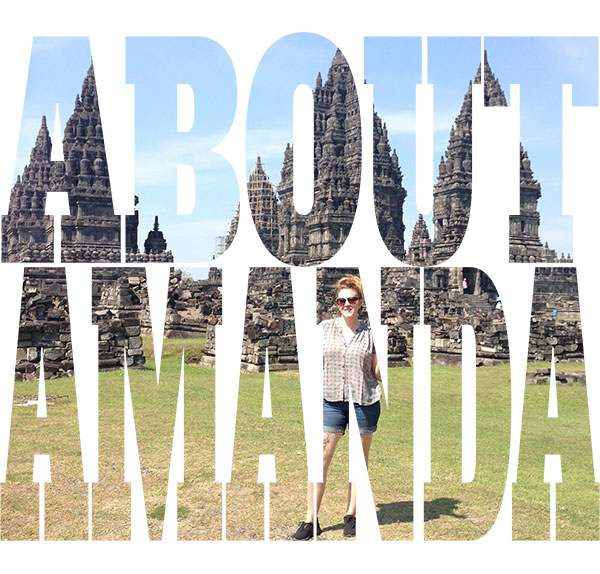 There was an error retrieving images from Instagram. An attempt will be remade in a few minutes.

Oh what a week it’s been!  But actually today is the tenth day of our sickness ordeal.  It started on a Thursday when I wasn’t feeling well.  When Joel got home from work he suggested that I see a doctor sooner rather than later.   Joel’s friend David is from Semarang and still well-connected here, so we asked him for a doctor recommendation.  He got on the phone, found a doctor and sent the doctor to our apartment within about an hour.  This is again another example of how Indonesians are incredibly hospitable and helpful.  The doctor said I most likely had a virus and gave me medication.  We were thinking maybe the flu because the vaccine I got can’t cover all strains and coming to a different country means all new flu types that are new to my system.  I started my medicines on Friday morning and was hopeful that I was on the mend.

After a couple of days I was starting to feel better!  Then it all changed and I got way, way worse.  We called the doctor back and he came again on Tuesday morning.  My second diagnosis was amoebic dysentery which really freaked me out.  I did take some comfort from wikipedia telling me the last notable death from dysentery was in 1942.   So again I started my (new) meds and was hopeful I was on the mend.

The doctor said I’d start to feel better in a day or two.  He was great about staying in touch to check in with me and after a day and a half when I was still in pain he said it was time to head to a hospital for injections.  At that point it had been a week- a week of nausea and pain, lots of pain, and I was feeling like I might never be 100% healthy again (yes, I think I was delusional at this point).  I cried like a little bitch at the thought of having to deal with a hospital- the waiting, the paperwork, the waiting- in my decrepit and deranged condition.   So Thursday night at 9:30pm Joel scooped up his teary, emotional mess of a fiancé and we cabbed over to Rumah Sakit St. Elisabeth- AKA St. Elisabeth’s Hospital.  The emergency room there was way better than I expected and after about 90 minutes the consensus was that I was checking into the hospital for the night.

As they wheeled me to my room, we were thinking that I’d start the medication that night, but then we learned I wouldn’t actually get it until the next day- a fun, little Indonesian to English miscommunication.  The next morning I saw the doctor and they took samples to get a confirmed diagnosis.  Then finally Friday morning, I got my first round of meds pumped straight into my IV- it was glorious.  I ended up having four rounds of the medication (originally thought I’d only have three) but after only the first bag I felt like they were pumping sanity directly into my body.  I did end up staying two nights and it wasn’t until Saturday morning just before check out that we learned I’d had bacterial dysentery all along.  I still can’t believe I got a disease that I had only heard of from the Oregon Trail video game in elementary school.

Joel was a trooper through the whole ordeal!  The first night slept on a dinky little pull out sofa in my room and then had to get up and go straight to work all day.  The second night I made him go home and get a good night’s rest in our bed, but was still back before 7:00am on Saturday to buy me donuts and fill out all the discharge paperwork.  He even played photographer when the nurses asked for a picture with me as we were leaving (asking for photo with the white lady is still a common occurrence).    Joel also took care of the bill.  Two nights in the hospital, two days of doctor fees, all my medication, lab work, nurses, food and even a new toothbrush and toothpaste for me to keep- grand total $293.  That is a badass hospital bill!

Here are some photos from my stay at St. Elizabeth Hospital…

This was my snack of tapioca balls with a baggie of milk on the side.

Here’s me right after the news that I was going home.  I feel like a WNBA star wearing Joel’s workout shorts!

The beautiful hospital grounds that I got to see for about one minute on the walk out.  I missed them on the way in because it was midnight and I was on a gurney.

On a side note, during this whole process we got an email from Joel’s parents that his beloved dog Jackson had gone to live on the puppy farm in the clouds.  Jackson was very old, blind and mostly deaf but it was a devastating blow none the less.   Here’s a picture of Joel and Jackson snuggling at the beach this past summer.   We miss you Jackie! 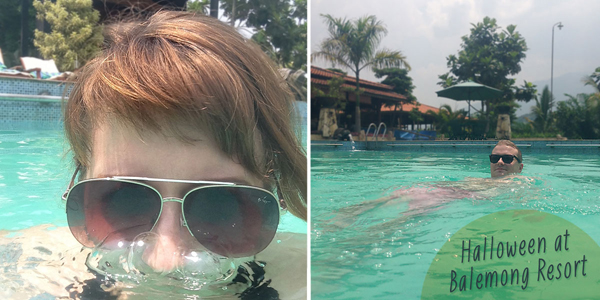 Tropical resorts are not what comes to my mind for Halloween weekend, but costumes and trick-or-treating aren’t really a thing in Indonesia.  Halloween is Joel’s favorite holiday so I thought a little getaway might cheer him up and Balemong Resort really delivered. 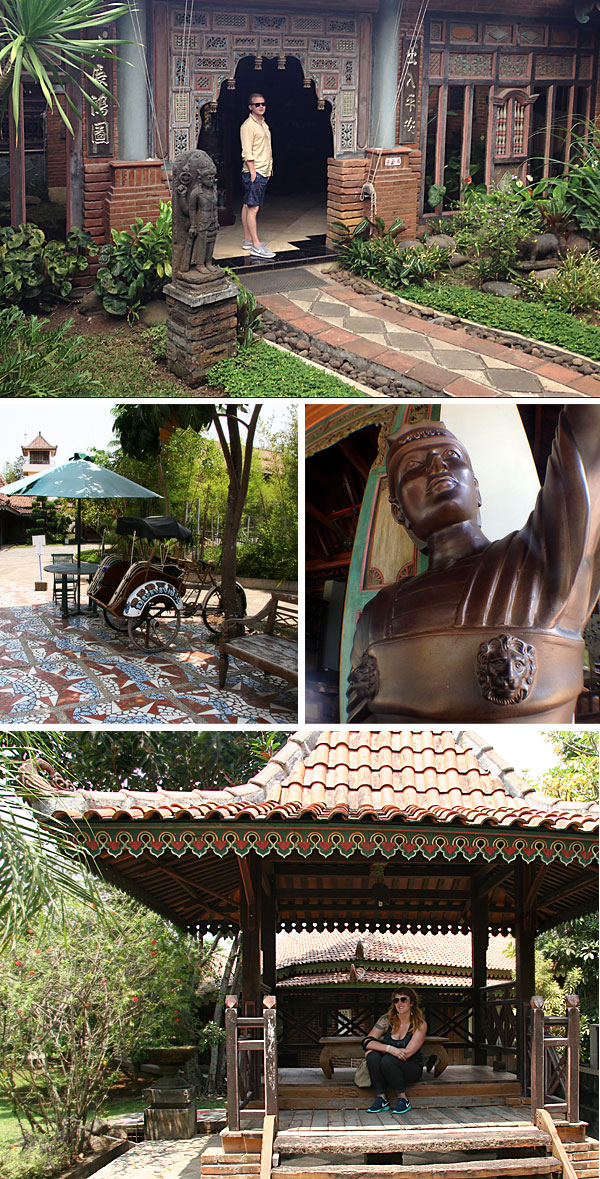 The structures and decor at Balemong are traditional Javanese- intricately caved wood and joglo roofs.  We found the resort just browsing through Google maps and there were not a ton of photos or info online.  I’ll definitely be reviewing them online and adding some more photos to their page on Trip Advisor because they deserve it.

The resort is located only about 20 minutes south of where we live in a town called Ungaran.  Because we’ve been getting around via taxi, we haven’t ventured outside the city so this was my first up close and personal view of Indonesian rice paddies.  They look so peaceful, but the moisture of the paddies means mosquitos, tons and tons of mosquitos!  Something about my body chemistry just beckons mosquito bites.  They don’t seem to bother Joel as much which is really unfair.  I feel like they should split their time evenly between both of us.  But you can’t reason with mosquitos so I just suck it up and wear lots of repellent. 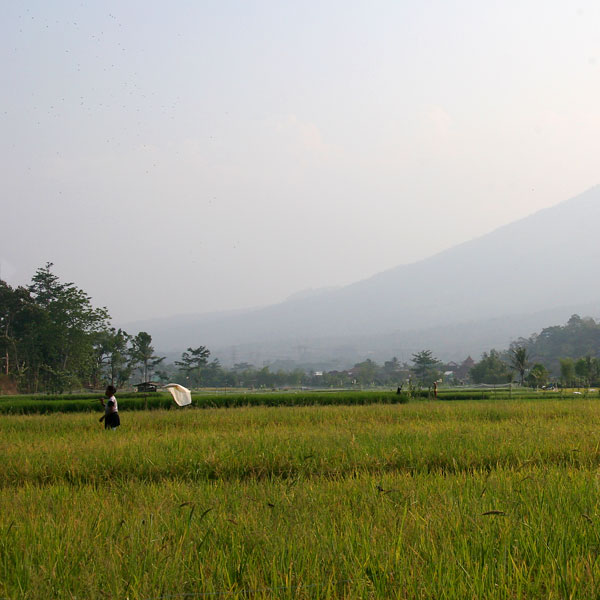 All of the walkways have different mosaic patterns.  We took lots of walks around the grounds just exploring the different buildings and checking out the vegetation.  Good sidewalks and walking paths are something that I really miss about life in the US so I tried to spend as much time as I could walking around and enjoying the cleanliness and serenity of the resort.  Of course we’d break up our walks by heading back to our villa to enjoy some quality time with our air conditioner. 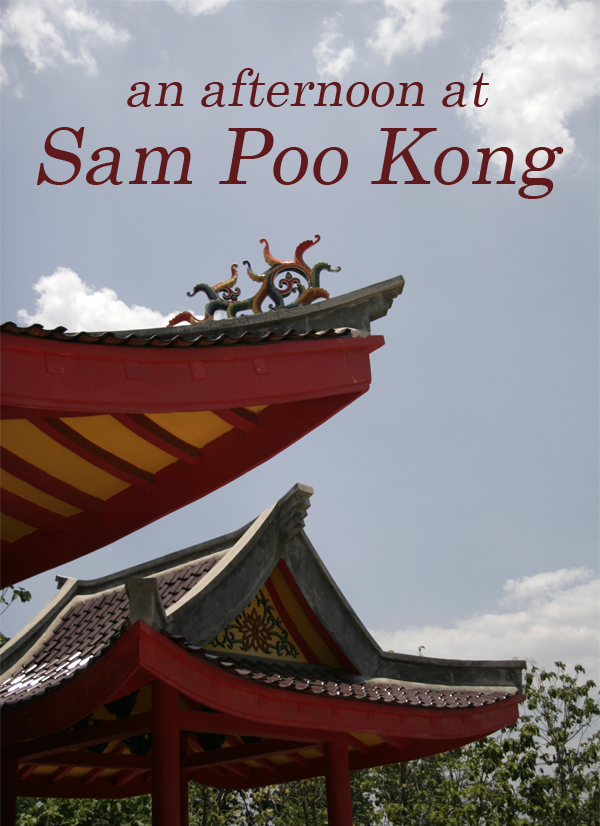 My second week in Indonesia and my first week on my own with Joel back at work, I decided it was time to start being in a tourist in my new city.  My first stop was Sam Poo Kong, the oldest Chinese temple in Semarang. The temple has beautiful examples of both Chinese and Javanese architecture.

The temple was bustling with tourists and kids on field trips the day I visited.  Being the only westerner in the complex will get you lots of attention.  Throw some pale skin and red hair into the mix and it only amplifies.  Here’s my little entourage of girls who followed me for the better part of an hour giggling and yelling, “Hello Miss!”